Conference on the Future of Europe: what to expect, if anything? 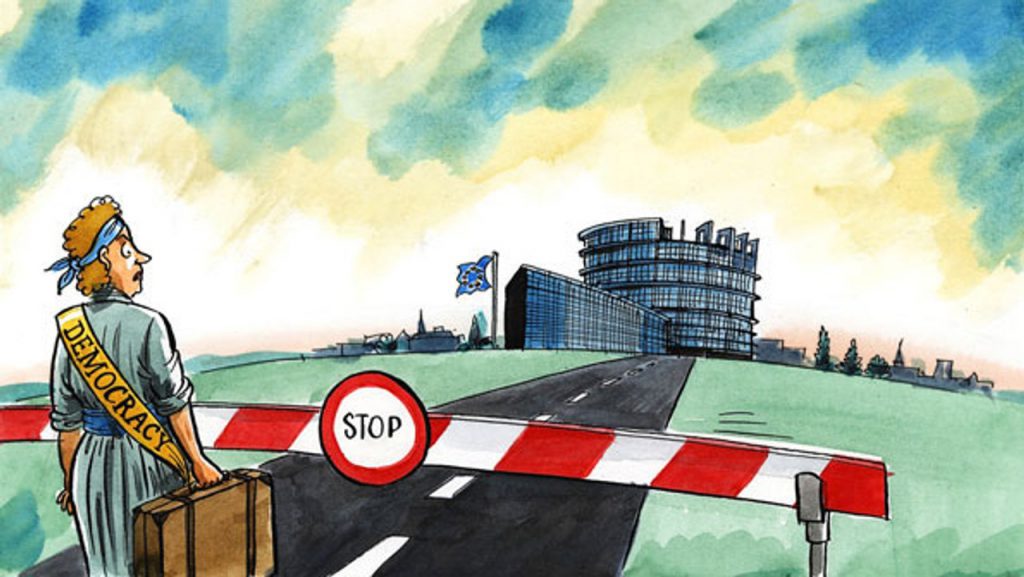 Image: The Economist "Elected, but how democratic?"

Finally, we are getting there. After months of announcements, delays, press releases, and joint declarations the Conference on the Future of Europe has officially been announced in March. The Executive Board, composed by representatives from the three main institutions, will oversee its work and follow up. The first formal event is scheduled for the 9th of May, a tentative date in which the representatives of the various institutions might meet in Strasbourg to formally launch the discussion. The scope has been clearly stated: “give citizens a greater role in shaping the Union’s future”. Therefore, with this ambitious preamble, citizens and civil society are demanding what can we expect from it?

Potentially, the Conference can bring anything. From simple work documents to a more complex scenario, that may lead to deeper reform or a new treaty. So far, the Conference on the Future of Europe has not such a goal or ambition. Rather it is aiming to include as many citizens as possible in the debate. Indeed, in the Joint Declaration on Conference on the Future of Europe the three representatives of the main actors, European Commission, European Parliament, and Council of the EU have agreed on the main values of the Conference: “inclusiveness, openness, and transparency”. But none of them has announced a specific road map or implementation after the Conference. Only the European Parliament has written down in its motion for a resolution that it “commits itself to a genuine follow-up of the Conference” and possibly to “initiating treaty changes”.

In general terms, the scope and values sound unarguable and very ambitious. However, timing might be an annoying problem not to be underestimated. First of all, the Commission and its officials got quite a lot on their plates. Covid-19 outbreak and vaccination’s rollout have not a visible finish line and jumping in such a time-consuming project might affect its quality and delay its results. On the other hand, while the European Parliament and Council seem to have more resources to invest in the Conference, time is ticking fast. The Conference was planned to run for at least two years, starting in the first half of 2020 and ending by the first half of 2022. Up to now, the beginning of the Conference was delayed significantly due to the Covid-19 outbreak, but no delay on its conclusion has been announced. Still, time is running and citizens want to see their ideas brought to the discussion table.

On the very positive side, there are the past cases of such a Conference. Digging into European history, no such concept of Conference can be found in the European Union and the Conference on the Future of Europe should be treated as the first in its case. However, at least two important milestones can be referred to as similar, by their objectives, and structure.

The first example is the Conference of Messina, which was held in 1955. It brought together six foreign ministers of the founding countries of the ECSC (European Coal and Steel Community) which needed a sort of re-boost for the European Integration. The Conference, which had not huge ambitions (the countries sent foreign ministers rather than heads of governments), turned out to be a great diplomatic success and one of the most successful meetings in the European history. During the conference, the six participants nominated the Belgian Paul–Henri Spaak as chairman. Spaak moderated brilliantly. He found compromises in each aspect and presented a year later the so-called ‘Spaak Report’, which served as the first brick of the Intergovernmental Conference on the Common Market and Euratom in 1956 and led to the Treaties of Rome, signed on 25 March 1957.

If the Conference of Messina was a boost for the early European Integration, there is a recent convention which got even more attention: the  Convention on the Future of the European Union (2001), which is different from the European Convention of 1999. The Convention followed the Laeken Declaration in 2001 and was a broader and longer meeting. More than a hundred people from national parliaments, EU institutions, and members of the European Parliament joined its work. The Convention has much more visibility or relevance than the Messina Conference and the expectations were much higher. For the first time, the works of the Convention were shared by Member State’s officials, members of the Parliaments, and civil servants.

Still, the new Conference which just started presents some important differences. For the first time, the citizens are the added value of such an important renovation process and the Executive Board has announced that will make everything possible to ensure their voices will be heard. The first step was the creation of a portal that has been launched in the 24 official EU official languages. There everyone can actively participate in the debate, organizing or attending events, sharing or reading ideas. Just in the first week, the platform got more than five thousand active participants, which generated about a thousand ideas and organized almost two hundred events. The domains are various, from climate change to social justice, from health to migration. The numbers of the platform are going to increase in the near future and new ideas will be discussed and shared.

However, the first criticisms are being voiced in response. Politico and other media outlets recently reported that some EU officials are doubtful on the format and adding additional layers of bureaucracy to the decision-making process do not help. This opens again an unsolved debate on the participation of citizens in the decision-making process and lawmaking. On one hand, the EU is based on representative democracy and the (old) system would just allow citizens to vote for representatives, which then vote and respect the will of the people. On the other hand, the Conference might be a first early-stage experiment of a more complex system: direct democracy, which will allow citizens to be even more present in the legislative arena and whose ideas can really be heard by the main actors involved in decision-making. Indeed Dubravka Šuica, Vice-President of the European Commission for Democracy and Demography opened the stage for further studies saying that if successful, the platform might become a permanent public consultation tool for legislative actors.

Very important is then the follow-up part. How many of those ideas will be discussed and studied? And who are the actors in charge of this honorable and time-consuming task? So far, very little has been shared with the citizens. Technology will play a key role and artificial intelligence will be used to filter the most attractive ideas. Then the Executive Board and experts will need to review them and based on their willingness engage in different kinds of actions.

This process is probably the hardest. EU Policy makers would need to decide what to do with all the amounts of information and hints they received from the platform. And some of them might be against their own values and goals. Indeed, as stated by the European Commission’s Vice President, the diversity of the thoughts are highly appreciated and every single idea is welcome, whether it is pro-Europe or skeptical. But in the latter cases, what the EU policy makers will do? Will they go against their own ideas to give real power to the democratic platform?

Key elements are that the Executive Board has full authority on the post Conference and there are no assurances the policymakers will follow the ideas proposed in the platform. Transforming the voices of the people - and their willingness - into potential draft policies, legislative acts, and repeal of a new change does not seem a concrete option today. As well, it will need the consensus of Members States which keep full competencies in some of the areas discussed.

Finally, the Conference on the future of Europe can lead anywhere but unfortunately, no citizens will have the power of deciding where. History showed us that an increase in European integration might be the pathway, even though it can be a long and turbulent path. At the same time, it does not seem that the policymakers are willing to share their legislative power with the citizens, at least fully. Therefore, citizens just have the opportunity to indirectly influence politicians, planting seeds in their minds, and hopefully, the Conference will bring us somewhere.