In the wave of democratic deconsolidation? 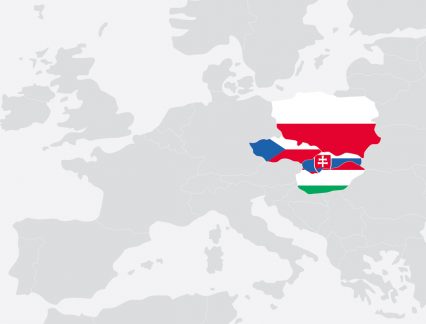 “Illiberalism” in the V4 region

During the last decade, the extent of democratic deconsolidation in the EU strengthened mainly in the post-Communist countries of Central-East Europe. The Western-type liberal democracy has started to stagnate and be replaced by the so-called “illiberal or defect democracy” (Žúborová, 2017, p. 1). Many scholars have noticed that some political regimes after the events of 1989 have not been successful in their transition process to liberal democracy. These political regimes have stagnated, setting a fertile ground for a new regime category, “hybrid regime“, to germinate. Hybrid-regimes belong to a “transitory class” due to belonging to neither authoritarian nor democratic regimes (Bozóki & Hegedűs, 2019, p. 3). The concept of illiberal democracy or defective democracy was firstly used by an Indian-American political commentator and columnist, Fareed Zakaria, to describe political regimes all around the world that misuse and eliminate the institutional guarantees of liberal constitutionalism, centralize power at the expense of the civil society and media freedom, and malpractice 'the rule of law' within their own political systems.

The first visible shift towards illiberalism occurred under the leadership of the current prime minister of Hungary, Viktor Orbán. Orbán’s right-wing Fidesz political party seized power in the 2010 parliamentary elections and since then has monopolised the state’s control on every aspect of political rule (Sata & Karolewski, 2020, p. 207). Due to gaining a constitutional majority in the 2010 parliamentary elections, Fidesz’ first crucial reforms regarded the modification of the constitution, as well as the restructuring of the electoral system (redrawing the geographical boundaries of constituencies) to its own favour. The new constitution, more precisely the “fourth amendment” diminished the power and the independence of the Constitutional Court and made the strongest judicial institution in the country the government’s personal ‘toolkit’ (Žúborová, 2017, p. 3). Other important political responsibilities such as the President, the Ombudsman, the Prosecutor General, the National Judicial Office and the Supreme Court lack autonomy from government, hence, checks and balances against the executive power -such as oversight of the government, applying corruption charges, vetoing legislation or procedures of juridical scrutiny – cannot be undertaken by any of these institutions. Besides such institutional corruption, Fidesz has also restricted and attacked media freedom in the country. Are there still any impartial media outlets? While private, opposition-aligned media channels still exist (an estimated 10%), government sponsorship favours pro-government media channels thus leaving impartial and critical media in a financially insecure situation.

Another negative trend of an illiberal way of conducting politics is also the case of another member state of the European Union, precisely Poland, within the so-called Visegrád Group. In recent years, Poland has taken a quite negative turn in its democratic path and has simultaneously followed the Hungarian tendency. The governing right-wing Law and Justice Party (PiS) has too reshaped the political arena and has taken some very questionable moves in its political agenda. Although PiS under the leadership of Jarosław Kaczyński has followed the Hungarian pattern, Europe’s influential ‘strongmen’, Orbán and Kaczyński, pursue diverging strategies. While Orbán is the current PM for Hungary – Kaczyński is a simple Member of the Parliament who is managing obscurely from the inside. By placing attention on Mateusz Morawiecki, the Prime Minister of Poland, Kaczyński can hold power behind closed doors and has more space to manoeuvre without direct power, authority and political accountability.

Poland’s most controversial reforms have taken place on an institutional level, more precisely by the dismantling of the Constitutional Court in the country. The judicial system lacks independence from the government and is used to break and intimidate opposition-aligned judges in the country. Due to other highly controversial reforms regarding the judicial system – judicial purge and restructuring of the court system – the Polish government was threatened with very severe capital sanctions after the European Court of Justice's preliminary judgement in 2018 (Sata & Karolewski, 2020, p. 216). The 2018 preliminary judgement of the European Court of Justice was related to the institutional changes within the Supreme Court itself. By lowering the retirement age of Supreme Court judges and granting the President itself the authority to decide on the extension of judicial service of Supreme Court judges, Poland has violated EU law (Zammit, 2018, p. 1). Such authority to the President would in practice mean that when deciding over-extension applications, the President - Andrzej Duda (appointee of PiS) - would be subject to neither any criterion nor any judicial review process. In this way, Duda would be able to fill the vacancies with party loyalists - 'partial judges'. Nevertheless, media freedom and independent journalism have also been restricted as in Hungary. The Law and Justice Party have created a new institution – the Council of National Media – that covers and partially censors every media outlet in Poland.

Judicial impartiality, respect to the rule of law and media freedom seem to be highly problematic in other Central Eastern European countries as well. Despite Slovakia having shown some positive trends in its democratic path following the parliamentary elections of 2020, it suffers from a high degree of corruption, clientelism and media repression. State capture also became a reality for Slovakia, under the SMER-SD government of Robert Fico between 2012-2016, which then escalated further into the demise of the second SMER government at the beginning of 2018. “Selective justice” prevailed under the de facto patronage governance of SMER-SD where selected groups of grouped interests (business circles, corporations and corrupt law enforcement institutions) interlinked with the ruling political elite managed the country (Meseznikov, 2018, p. 40). As a result of this clientelism and corruption, the Slovak population perceives the judicial system to be one of the most corrupt sectors with the lowest input confidence within the country. A 2016 ISSP survey conducted by the Institute of Sociology of the Slovak Academy of Science revealed that almost 3/5 of Slovak respondents suspected the political or judicial elite to be involved in corruption and bribery charges (Meseznikov, 2018, p. 40). The course of events escalated in 2018 with the death of an investigative journalist, Ján Kuciak and his fiancée, Martina Kušnírová, who tried to reveal the high level of corruption within the government and the misuse of European funds. Following the death of Ján Kuciak, dozens of high prominent judges and officials including – the vice-chair and acting president of the Supreme Court, the former deputy-Justice Minister, as well as the top prosecutor of the Special Prosecutor’s Office – resigned and were prosecuted by Slovakia’s National Crime Agency (NAKA) due to being linked to a controversial SMER-SD aligned businessman, Marián Kočner, who was involved in the death of the journalist and his fiancée (Eisenchteter, 2020). What has this tragic event induced? It has shown the immense consequence of power centralization and state capture in Slovakia. Despite the fact that media freedom in Slovakia was parallelly restricted, such as in Hungary or Poland, the extent of this restriction and, later on, oppression, escalated into a turmoil which triggered an array of events – the demise of the SMER-SD government and judicial purges.

Last but not least, the Czech Republic is perceived to have the most liberal political environment of all the Visegrad Four countries. Despite it has not been subject to any controversial reforms at an institutional level and neither has the independent media suffered any serious attacks, safeguards for the respect of the rule of law, civil society and the impartiality of the judiciary needs to be maintained. There has been a small degree of centralization of the media sector by the leading elite of Prime Minister and his political party’s (ANO) business circles. Despite Prime Minister, Andrej Babiš, keeping the power of the country’s institutions within the liberal and democratic boundaries, ANO’s high populist anti-EU rhetoric remains the subject of further debate. A survey conducted by Globsec revealed that the Czech Republic is the least inclined to push for its EU membership out of all the V4 countries (Meseznikov, 2018, p. 48). Every country part of the V4 region, including Czech Republic (to a smaller extent) have demonstrated some “illiberal” turns in their political system. The V4 group’s branding nationalist narrative and rhetoric innovations led to a unified alliance which was clearly showcased in the V4’s position on the Refugee relocation system proposed by the European Commission under the 2015 migration crisis and since then on the question of a “multicultural idea of Europe”. The V4 has continued with an anti-immigrant agenda, emphasizing that “the multicultural idea of Europe and the integration of distinct cultural and religious groups into the EU are not possible (Enyedi, 2020, p. 8).

Despite Slovakia and the Czech Republic experiencing a small wave of democratic backsliding, the latter two countries have clearly demonstrated some positive trends with the passing of the years. We can argue that the most problematic countries within the V4 region are admittedly Poland and Hungary.

How can the European Union react to this tendency of “illiberalism” and democratic backsliding in these two countries - as in others?

Recently, the European Commission introduced a new mechanism (already approved by the ordinary legislative procedure- both the European Parliament and the Council) that would allow the suspension of EU funds to a member state stepping on the principles of the rule of law and breaching the fundamental democratic principles and values that the European Union stands for (European Parliament, 2020). The European institutions have finally set a limit to the misuse of benefits that come with the concession of EU membership (and from EU taxpayers’ money). Poland and Hungary will need to take a step back and review their democratic path to be eligible for future EU funds in the coming years of the post-pandemic era.